Part of FDAAF’s mission is to encourage businesses to become more wheelchair-accessible, and to spread awareness of individuals with disabilities. To put this into action, FDAAF’s pilot project, launched in the summer of 2015, was the Wheelchaired for a Day challenge. Those who accepted the challenge agreed to use a wheelchair for a full 24 hours as they went about their normal work days, experiencing the world from the point of view of people who rely on wheelchairs for mobility. 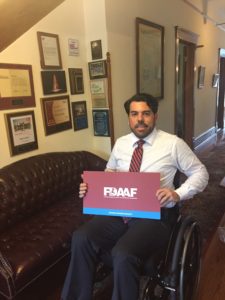 Gainesville personal injury attorney Dan Vazquez of Fine, Farkash & Parlapiano, P.A. was the first participant of the first annual “Wheelchaired for a Day” challenge, to rely on a wheelchair for mobility for 24 hours, organized by the Florida Disability Access and Awareness Foundation (FDAAF). The FDAAF’s mission is to inspire inclusion for everyone through educating the public on civil rights, encouraging business to become wheelchair-accessible, and promoting awareness of individuals with disabilities while helping them lead more fulfilling lives.

Vazquez, a lawyer and member of the Florida Justice Association (FJA), said the experience was tough, positive, and enlightening. “The physical challenges alone were surprising,” said Vazquez. “Add to that the frustration of not being able to do simple tasks like reaching and carrying what you’re used to and needing to rely on others for help, I began to see within a few hours of being in the chair just a fraction of what the disabled deal with on a daily basis.”

Recently, the FJA launched a social media project called “I Am FJA” through which members were tasked with sharing their community involvement with other members. “I have worked with many client who have become wheelchair-bound due to spinal injury or leg amputations,” says Vazquez. “And though I learned of what their life was like by talking with their doctors, friends, and family, living that experience, if only for just one day, has enabled me to better understand their life challenges on a level I never truly understood before the FDAAF brought me on board with this project. It was a wonderful experience, and I’m honored to have been the foundation’s first participant.”

Gwendolyn Saffo, the Interim director of Gainesville’s Office of Equal Opportunity, also accepted the “Wheelchaired for a Day” challenge. Ms. Saffo chose August 6 for her Wheelchaired Day because the city commission met on that date, and used a wheelchair on loan from Nu Motion to FDAAF.

Her Wheelchaired Day began at 11 a.m. in the wheelchair-accessible conference room in the city’s Equal Opportunity Office. From there, Ms. Saffo made her way in the wheelchair to City Hall. “I’m already learning a lot,” Ms. Saffo said as she wheeled her way into an elevator and down a ramp outside. “It takes a lot of strength,” she said as she maneuvered the ramp outside City Hall, asking for help from her assistant, Sue Dubose.

At City Hall, in a meeting to discuss the agenda of the upcoming commission meeting, Ms. Saffo met with some of her colleagues in city government, including the city manager, Russ Blackburn. He recalled the several months he had spent in a wheelchair due to an injury, and Ms. Saffo challenged him, and the rest of those at the meeting, to participate in the Wheelchaired for a Day Challenge as well.

So far, those who have accepted the challenge, in addition to Ms. Saffo, include attorney Dan Vasquez, of Fine, Farkash & Parlapiano; Nell Page, of Southern Legal Counsel; Ben Boukari, a commissioner with  the City of Alachua; Greg Undeen, client advocate at Grace Marketplace; and Lauren Caldwell and Jessica Hurov of The Hippodrome Theatre.